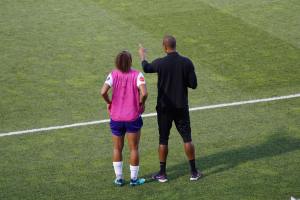 Alan ran out onto the soccer field after his daughter, Ashley, and her team. He missed his soccer days and was excited to share his experience with the young team. Though he no longer played soccer, he felt eager to be a part of Ashley’s life.

Alan recalled the daily practice of dribbling and the importance of passing the ball between the team, he encouraged this practice every time he was there to watch the team.

When Ashley joined the representative team, Alan volunteered to coach. As coach, Alan experienced the pressure of parental expectations. Parents wanted to see their child excel, yet they disagreed with the approach of consistent practice Alan offered.

“What is doing the same thing over and over going to do? When will they learn more?” He’d often hear.

Despite the complaints, Alan remembered how consistency helped and continued on, happy to witness individual progress amongst the team.

At one game, Alan placed a new member in a lead position to give the player freedom to test her potential.

A parent ran up to him and said, “Alan! What were you thinking! Can’t you see that girl isn’t meant to be there? Why didn’t you pick my daughter?”

Alan calmly replied, “I know you disagree, but please try to understand. You have your way. I have my way. As for the right way, the correct way, and the only way, it does not exist. I must be fair to all team members, new or old.”

Inspired by “You have your way. I have my way. As for the right way, the correct way, and the only way, it does not exist.” – Friedrich Wilhelm Nietzsche

Astrid Hardjana-Large is an inspirational author who enjoys Life and adversity. She is motivated to share her inspiration from Life experiences and encourages readers to persevere on the journey of Life. View more posts

This site uses Akismet to reduce spam. Learn how your comment data is processed.