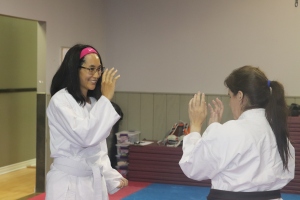 Since I was eight years old, I listened to my father talk passionately about martial arts and earnestly trying to convince my brother to join. I recall thinking it was strictly for males, yet I was interested in the spiritual aspect of martial arts. I admired the determination demonstrated as martial artists performed and I fell in love with the concept of determination.

In 2004, I followed my husband to his dojo and joined Tai chi, it was the closest I got to karate without endangering myself. I followed seminars, volunteered at tournaments, and listened to many classes, but didn’t risk it with epilepsy.

After my stroke in 2015, I didn’t think it was possible to rejoin martial arts, but my dojo welcomed my presence. In Autumn 2017, I went back to Tai chi classes, realized it was a more liberating therapy and continued volunteering to be with family and a part of karate.

In April 2018, I finally joined karate. Despite the apprehension of what I could do, it was a dream come true. Thirty years of dreaming became reality and martial arts is now my primary therapy. In an environment of determination and examples of what I wish to be, I’m surrounded by an abundance of motivation to grow and be. I won’t climb ranks quickly and I’m happy to go slowly believing it will fall into place when the time is meant for me.

“It does not matter how slow you go as long as you do not stop.” -Confucius

This site uses Akismet to reduce spam. Learn how your comment data is processed.